We’ve been looking at the folklore of poisonous flowers, from the showstoppers like Angel’s Trumpet to the magical larkspur, via common bluebells. They are by no means the only poisonous flowers in existence. This week, we’re moving away from flowers and onto toxic trees. I’ve seen one of these, oleander, in the Luxembourg Gardens in Paris. Meanwhile, laburnum is a common sight in gardens across Britain. Juniper is a slightly contentious inclusion, but I’ll explain why when we get to it. 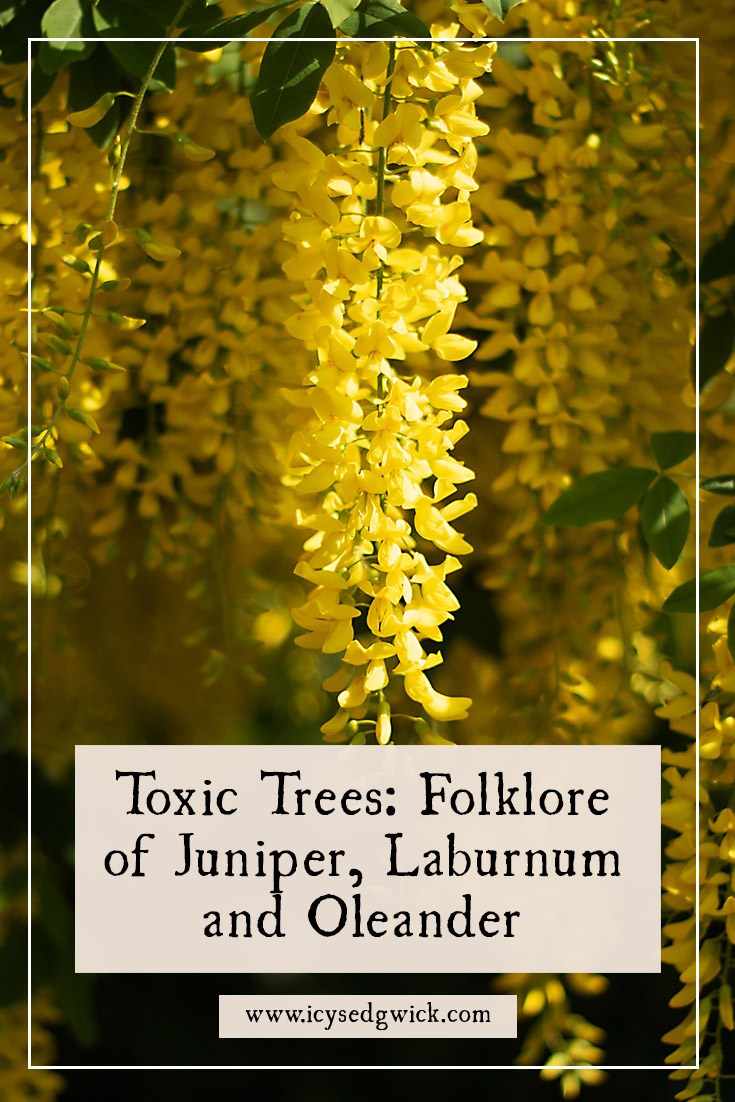 Keep reading to learn more about these fascinating trees.

And remember, this post is for entertainment purposes only. It is not designed nor intended to replace medical advice. Do not consume or use any of these plants if you don’t know what you’re doing.

Now, this one may seem like an odd entry into a post about toxic trees. But there are around 40 species of juniper, and some of them are poisonous (Land, 2008). The Juniperus communis provides the flavouring for gin, which comes from the berries.

That said, large doses of the berries can be toxic, leading to convulsions, diarrhoea and vomiting (Christiansen 2020). It’s not advised for consumption or use by pregnant women and people once used its oil to induce abortions (Carr-Gomm 2018: 62). And to be fair, anything can be toxic in large enough doses. But it was worth including juniper since it does have toxic varieties.

Symbolically, juniper meant aid, asylum, love, and succour (Dietz 2020: 119). Magical practitioners might use it for anti-theft, breaking curses, or bindings. They also associated the tree with longevity (Carr-Gomm 2018: 61). Historically, priests used juniper in the Egyptian embalming process while the oil now appears in medicine, aromatherapy and perfumery (Carr-Gomm 2018: 62).

People would also petition the spirit of the juniper to find stolen items (Harrington 2020: 76). If you’re interested in other magical uses for juniper, I highly recommend The Treadwell’s Book of Plant Magic.

Mary apparently hid Jesus under a juniper during the Flight into Egypt. God blessed the tree as a reward, giving it the power to deter evil (Baker 2011: 85). People burned juniper leaves to drive away demons and kept them smouldering as a defence against plague (Baker 2011: 85).

It also made a good doorstep tree. According to Margaret Baker, any witches who wanted to enter had to count all the tiny leaves before they could do so. They would inevitably lose count and have to start again, keeping them outside your home (2011: 85). As a result, you shouldn’t cut down a juniper tree. In Wales, it was believed anyone who did so would die within the year (Harrington 2020: 76).

Hanging juniper at the door was believed to protect the home from evil (Dietz 2020: 119). In Italy, people brushed juniper branches across any holes in their houses to stop evil spirits from getting in (Harrington 2020: 76). Philip and Stephanie Carr-Gomm recommend that to properly cleanse a protect a room, you should hang juniper twigs or dried berries in a pouch (2018: 62).

They also assert that people used juniper smoke to cleanse themselves and their houses during the approach of summer (2018: 60). It was also apparently used in Beltane fires to purify livestock (2018: 62). The Scots burned juniper to ward off the evil eye (Harrington 2020: 76).

Christina Oakley Harrington notes the use of juniper in folk magic from ancient Greece until the 20th century (2020: 76). Its protective qualities noted above also linked it with death. Therefore in ancient Greece, people burned juniper berries at funerals in honour of the Furies. They burned the branches as incense for Hades (Harrington 2020: 77).

Roman emperors and generals planted juniper trees in Livia’s orchard. If they withered, it meant an early death or assassination (Baker 2011: 85).

It was also recommended to burn juniper in a room where a person has died. The dried berries worked the best for this purpose (Harrington 2020: 77).

Laburnum is also known as the golden chain tree, due to the formation of its yellow flowers. JRR Tolkien apparently took his inspiration for the Laurelin, one of the mythological trees in The Silmarillion, from the laburnum. They’re quite common in gardens around Britain.

According to the Alnwick Garden Poison Garden souvenir guide, all parts of this common garden tree are harmful. Symptoms include vomiting, coma, intense sleepiness, convulsive movements, unequally dilated pupils, and slight frothing at the mouth. That said, poisonings are thankfully rare.

In fact, Ruth Binney relates a tale from 1843 in Inverness. A youth working in service put dry laburnum bark into the broth for dinner. He’d apparently wanted to make a female servant vomit—we can only guess as to why. The cook became ill after noticing a strong taste and it took her over a year to recover (2018: 115). It’s interesting that the youth used laburnum bark. It’s normally the seeds that pose a problem. The seeds come in bean-like pods that often fall into gardens where children may find and eat them.

Laburnum’s symbolic meanings are blackness, forsaken, and pensive beauty. It gets its latter association since the flowers are so pretty, even if the tree is incredibly poisonous (Dietz 2020: 123). The laburnum could be mistaken for gorse since they both feature bright yellow flowers. However, gorse has needle-like, sharp leaves, and the flowers appear all over the brush. Laburnum flowers hang down in graceful clusters.

There’s also an interesting snippet of lore that comes with these toxic trees. If you cut down a laburnum tree, a neighbouring laburnum will refuse to bloom the following season in protest (Baker 2011: 88).

Pliny the Elder described the oleander as being poisonous to “beasts of burden” but an antivenom for snake venom in 77 AD (113). As with many things Pliny said, he was utterly wrong, because oleander is incredibly toxic. The oleander symbolically means beauty, beware, caution, distrust, danger, and grace (Dietz 2020: 148).

According to the Alnwick Garden Poison Garden souvenir guide, the foliage and flowers are toxic. The foliage can cause skin irritation if eaten. Even burning the wood creates irritating smoke (Stewart 2020: 114). In fact, the plant is so toxic, people refused “to sleep in the same room” as oleander. In Italy, people believed bringing any part of the plant into the home would also bring disgrace, sickness, and misfortune (Dietz 2020: 148).

Its poison, oleandrin, brings on nausea, vomiting, weakness, an irregular heartbeat, and a decreased heart rate. It’s toxic to animals, though the leaves apparently taste rather bitter. Poisonings of people are rare, since the leaves taste awful, though livestock have died after the leaves were mixed into their hay (Fuller 1986: 77). Two toddlers died in southern California in 2000 after chewing the leaves (Associated Press 2000). In the novel and film Dragonwyck, the villain poisons his wife by crumbling oleander leaves into her food.

The oleander apparently gets its name from a tale in Greek mythology, that of Hero and Leander. Hero was a priestess of Aphrodite, while Leander was her lover. He swam across the Hellespont every night so he could see her. To guide his way, Hero left a lamp burning for him in her tower. Unfortunately, one wintry night, the wind blew out the lamp. Leander lost his way in the strait and drowned.

In one version of the legend, Hero walked up and down the shore the next day looking for him, crying “Oh, Leander, Oh, Leander.” When she found his broken body, he still clutched an oleander flower. She later threw herself from her tower to join him in death.

Oleander also appears elsewhere in Greek myth. Haralampos V. Harissis suggests that the Pythia, the Oracle of Delphi, used oleander to issue prophecies on behalf of the god Apollo (2014). He argues that chewing the leaves and inhaling the smoke would produce the symptoms described in ancient literature.

People love oleanders because it’s a gorgeous tree, but it does appear in tales of both murders and accidental deaths (Stewart 2010: 113). Amy Stewart relates the urban legend of campers dying after using oleander twigs as skewers (2010: 113). The Alnwick Garden Poison Garden souvenir guide elaborates further. According to their text, French soldiers used oleander branches to make skewers during Peninsular War. They used the skewers to cook their meat over a fire. 7 out of 12 who ate the meat apparently died.

Trouble is, this story bears all the hallmarks of an urban legend. Why? Because it’s difficult to find actual reports of them. The stories always repeat the same central aspect. People use oleander twigs to make skewers. Then they roast food over a fire using these skewers, and either die or fall very ill. It’s been ascribed to everyone from Alexander the Great’s soldiers to those of Napoleon (Fuller 1986: 78). But the lack of any solid evidence means this is more likely to be an urban legend…making it very disappointing to see it repeated as a hard fact in certain books.

Do you have any of these toxic trees near you?

These trees are all beautiful to have in your garden. In the case of juniper, the common variety is even quite safe, as long as you take precautions when using the oil if you’re pregnant. If you’re not sure which variety of juniper you have, have a professional identify it before you start using it for anything.

In the case of oleander and laburnum, a hefty dose of common sense and respect for these toxic trees will go a long way!