The folklore of flowers proves an expansive subject, both terrifying and interesting in equal measure. Much like the world of trees and plants at the best of times. They follow their own cycles, often independent of human intervention. They’ll often grow in seemingly inhospitable environments. They’re living creatures, but they’re rooted to the spot. They are hardy or delicate, wild or cultivated.

They can also be incredibly dangerous. 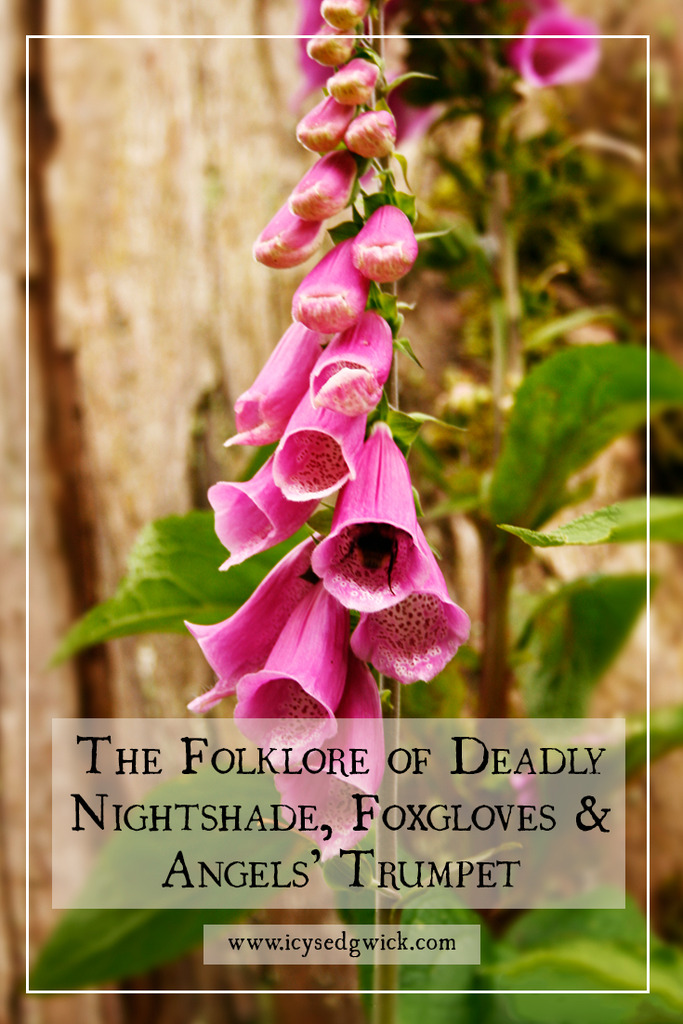 Poisonous plants are a particular interest of mine and I like to call it toxic botany. One of my favourite places to visit is the Poison Garden at the Alnwick Garden where some of the plants are even kept under lock and key. Others, like henbane, produce such a noxious smell that you don’t even want to go near them.

At the Poison Garden, knowledgeable guides lead small bands of visitors among the beds. They point out the different varieties and relate tales associated with the folklore of flowers. Some of them are common plants you’d find in your garden, others are more difficult to cultivate. If you’re interested in the development of poison gardens, I have an article about them on the Folklore Thursday website.

But here are three of my favourite specimens, as we delve into the folklore of flowers!

Remember, none of this post constitutes medical advice, and the information presented is for entertainment purposes only.

Its name, belladonna, comes from the Italian, ‘beautiful lady’. There was a belief that the plant would create visions of a beautiful temptress leading to its name (The Alnwick Garden: 8).

There is another explanation. In bygone days, Venetian women believed that dilated pupils made them more attractive. Therefore they dropped belladonna into their eyes to dilate the pupils. It’s not as mad as it sounds. The pupils naturally dilate when the person is aroused, so it would serve to make the ladies look more interested than they perhaps were. Quite handy if you’re after a husband.

Its name, Atropa, comes from Atropos, the third of the Greek Fates. It was her job to cut the thread of life after it had been measured out by her two sisters. It was also sacred to Bellona, a Roman war goddess. Belladonna is very heavily associated with death.

Deadly Nightshade and the Devil

Deadly nightshade was known as the plant of the Devil in Bohemia. If you released a black hen on May Eve (Walpurgisnacht), he would chase it and leave the nightshade unguarded. I’m assuming this was recorded because it made this the ideal time to harvest the plant (Baker 2011: 108). Parents told their children that those caught picking the berries would meet the Devil face to face. They needed a way to discourage their children from eating the berries; they’re apparently quite sweet. They’re also highly toxic, so keep away from the entire plant. All of it is extremely dangerous.

That said, people apparently made it into a collar for their cattle to avert the Evil Eye. You could also lift an enchantment from a person by putting a wreath of nightshade on their head (Baker 2011: 108).

Along with opium poppy and other plants, belladonna was believed to make up the ‘flying ointment’ used by witches. Commentators thought the ointment helped the witches to fly to their gatherings, but it’s more likely that a combination of the plants caused hallucinations. This helps to explain why some people used it in spells to “induce second sight” (Baker 2011: 107).

The foxglove is also known as fairy thimbles, witches’ gloves, and dead man’s bells. According to folklore, if you hear the bells ring, you’ll die soon (Baker 2011: 61). They are among the prettiest of the poisonous plants yet it’s also medicinally very useful. English doctor Will Withering discovered the plant’s properties from a herbalist. He originally developed a cure for dropsy using digitalis, but now it’s also used in heart medicine (Laws 2010: 64).

Fred Gilliam explains that for Culpeper, the plant could be used to treat the ‘King’s Evil’ (scrofula), or to clean sores. It was also called throatwort for its use in treating throat infections. But do not consume any part of the plant yourself (2008: 30).

The plant is toxic, but planting it in the garden may grant your house protection. It is also said to attract fairies and according to legend, the white spots inside each bell are marks left by fairies. But don’t pick the foxglove and bring it inside, as it’ll annoy the fairies. This made it an unlucky plant to have indoors, though Margaret Baker also notes it was unlucky to have on board ship (2011: 61).

Leave it outside where it’ll be a favourite spot for bees!

In some sources, the name ‘fox glove’ was just a misspelling of ‘folk’s glove’. In others, the name came from the fact that fairies apparently taught foxes to ring the bells, warning other foxes of hunters in the area (Binney 2018: 31). Another tale claimed that the fairies gave the flowers to the foxes to wear over their paws so the hens in the hen house wouldn’t hear them coming (Binney 2018: 31)!

Its legends extend beyond fairies. According to Roman mythology, Juno grew tired of Jupiter conceiving children with other women – but not her. The goddess Flora touched a foxglove to her belly and breasts, and Juno conceived the god, Mars.

In the language of flowers, the foxglove represents insincerity (Binney 2018: 31). That’s because it hides a poisonous heart behind a pretty facade.

Angel’s trumpet is another member of the Solanaceae family. It’s toxic, but its unpleasant taste makes accidental poisoning rare. Some people make tea from the seeds. This dodgy practice is what usually causes poisonings. It contains a lot of scopolamine, which gives it psychoactive properties.

But this post is about the folklore of flowers! At one time Brugmansia was allegedly a favoured murder weapon. Professional assassins thought it caused a lack of movement, or induced sleep, in victims (The Alnwick Garden: 9). Whether this ever worked isn’t clear since most reports say the plant’s chemicals cause agitation.

In more magical terms, Brugmansia can be used to encourage communication with the dead. It’s a little more dodgy than using a Ouija board. Its name is also associated with a snippet of folklore about the planet. Apparently, if you sleep under a brugmansia plant, you can’t wake up because the angels will come for you (McIndoe 2014). It’s more likely the effects of its fragrance that create a problem.

They are related to deadly nightshade and black henbane. That’s one fairly poisonous family tree! They are beautiful though, and there’s something very magical about them. I often wonder if the trumpets sound in the dead of night.

They’re often confused with Devil’s trumpets, which are actually part of the Datura species. They are related to Brugmansia, but they are different plants. The easiest way to tell the difference is Devil’s trumpets bloom upwards, while Angel’s trumpets hang down from the plant.

The study of the folklore of flowers reveals some interesting and unusual stories.

And what better way to warn someone away from something dangerous! Humans respond to stories and fear, and some of the stories about plants are tremendous!

Have you got any of these in your garden? Let me know in the comments!

McIndoe, Andy (2014), ‘What to plant for a Mediterranean look’, Learning With Experts, https://www.learningwithexperts.com/gardening/blog/what-to-plant-for-a-mediterranean-look.