The world watched in horror as one of the most famous cathedrals burned. But amid the billowing smoke and crackling flames, a tiny miracle happened. The 180,000 bees who live on the roof of Notre Dame decided to take a nap, no doubt inspired by the carbon dioxide in the smoke. And survived the fire. 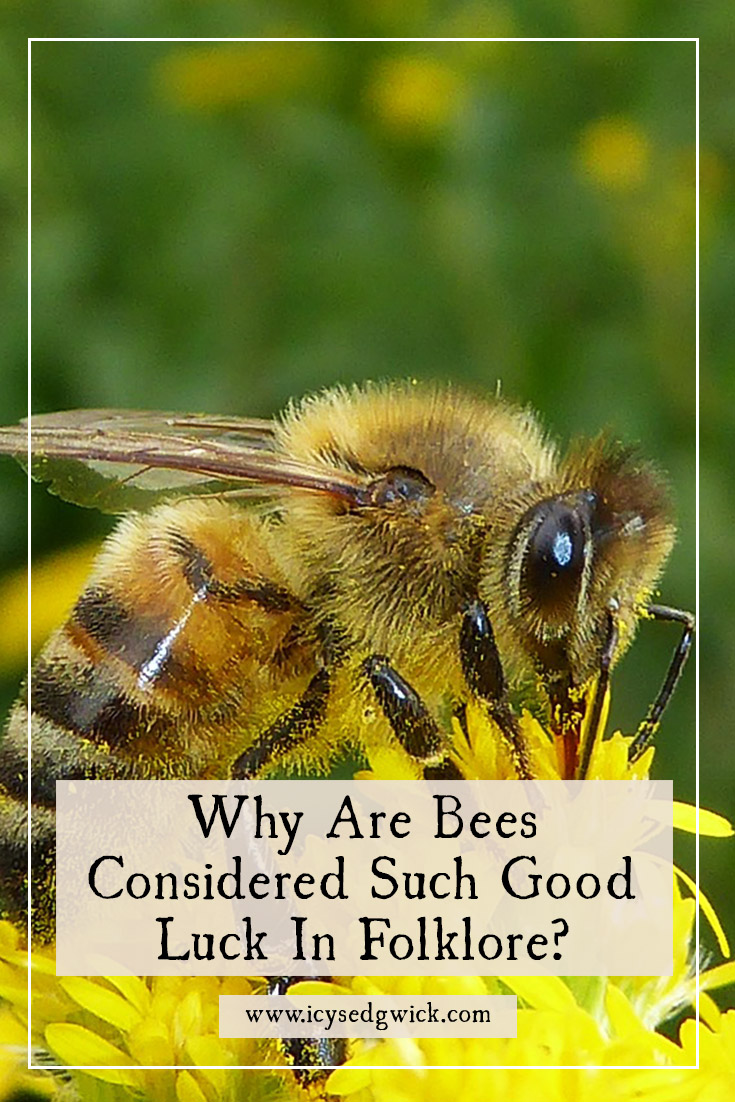 It just goes to show what mysterious little insects they are. And they’re absolutely vital to life on earth. Like butterflies, they pollinate plants. They’re excellent for promoting biodiversity.

So let’s take a closer look at the folklore and superstitions of these glorious animals. Hit ‘play’ to listen to the podcast episode of this post. Or keep reading below!

In the ancient Greek, Roman and Celtic societies, people believed bees acted as messengers between our world and the next. The Celts saw bees as being incredibly wise. James Slaven points out that in Scotland’s western isles, “bees were thought to embody the ancient knowledge of the druids.”

Bees were sacred to the Irish goddess, Brigid. She had an apple orchard in the Otherworld, and her bees brought her the nectar from the trees. The products from the insects were so valuable that even the rivers of the Otherworld ran with mead.

Ancient Egyptians believed honeybees came from the tears of Ra, the sun god. They believed bees in flight were delivering messages from Ra.

The Romans also believed Jupiter gave the bee its sting so it could defend its honey. Juno saw the weapon as precious and insisted the bees repay Jupiter in some way. That’s why bees die when they sting you.

In ancient Greece, some believed bees were the souls of priestesses. But within Christianity, St. Bernard claimed the bee symbolised the Holy Ghost. And as well as being the patron saint of commercial greetings cards and heart-shaped tat, St. Valentine was also the patron saint of beekeepers!

And the Greeks thought if a bee landed on a baby’s lips, they’d go on to become a mighty speaker. It’s not surprising that Norse mythology offers something similar, in the form of the Mead of Poetry. This magical honey drink would bestow poetic inspiration.

The Origin of the Honey Bee

In The Lore of the Honey-Bee (aff link), Tickner Edwardes relates the origin myth of the honey bee. The god Saturn had a nasty habit of eating his children at birth, so his wife Ops hid his son Jupiter on the island of Crete. Ops left Jupiter with Melissa and Amalthea, the King’s daughters.

They hid Jupiter in a cave, where some bees lived. They gave their honey to Melissa to feed the baby god. Though in other versions of the story, the nurses continuously made noises to hide Jupiter’s squalling. The noise drew the bees to the cave and they took over Jupiter’s care. To repay them for their kindness, Jupiter gave them “a special gift” to help with “the propagation of the species”.

Bees are said to hum at midnight on Christmas Eve to herald the birth of Jesus. In Cornwall, if you needed to move a hive, you could only do so on Good Friday.

A Cornish saying followed that if you could throw a handkerchief over a bee swarm, you could claim the whole swarm and plenty of good luck.

Don’t buy or sell a hive as they don’t like being bought or sold. If you’re buying them, pay for them with the first piece of honeycomb you get from the hive. Or barter with other items.

A bee landing on your hand means money is on the way. If one lands on your head, it means success will be yours. Bees often represent prosperity and wearing honey bee charms can be a good way to attract wealth. The associations aren’t really difficult to see, given how industrious and productive bees are.

And ladies, if you want to know if your husband has been cheating on you? Lead him past a bee hive. He’ll only be stung if he’s been unfaithful.

Bees flying into your house mean a visitor will soon arrive. Killing the bee means the visitor only has bad news for you. And presumably that’s bad news for the bee, too. Don’t try and force the bee out, just leave the window open and it’ll get out on its own. If you force it, it’ll take your good luck with it.

Go and Tell the Bees

Bees became extended members of the family. Whenever there were births, weddings, moves, or deaths, a family member would go and tell the bees what had happened. If they didn’t, the bees might take offense and either leave the hive, or stop producing honey.

Considering the departure of bees from the hive was an omen of death, you can see why people were keen to keep them happy!

It was also important to speak to them in a calm voice. And you should absolutely never swear at bees. Again, they might take offense and leave.

But in Wales, the family member had to tell the bees about the death before the funeral took place. They also added a black ribbon to the hive to help keep Death from paying the household another visit.

If the bees chose to stay with the family, they’d hum.

In Ireland, the family decorated the hives with black cloth and left the bees their share of any food from the funeral.

Women would tell the bees when they were about to be married. They’d often leave a piece of their wedding cake for the bees.

The departure of bees from their hive wasn’t the only death omen involving these little insects.

Swarms landing on a dead tree branch meant death would soon follow for either the person who saw them or someone in the beekeeper’s family.

Bee swarms getting into the house was also considered an ill omen.

If a bee flies into your house, it brings good luck with it. But if it dies there, it’s brought bad luck. And killing a bee is ridiculously unlucky.

The Healing Power of Honey

If you’ve got a sore throat, then go and get some manuka honey. Let a teaspoon dissolve in lemon and ginger tea. Enjoy while it’s hot, and repeat this until the sore throat eases.

This isn’t folklore, it’s just what I use when I get a bad throat!

But the healing power of honey, manuka or otherwise, is fairly well documented. In Scotland, people made a cure from heather honey, whiskey and cream for wasting diseases.

Honey was so valuable in ancient Egypt that it was often used as a gift for the dead. In some cases, bodies were even preserved in honey.

Some people used to believe a bee sting could prevent, or cure, rheumatism.

Meanwhile, dreaming about a bee sting can show you’re overcoming a painful event in your past. Dreaming about bees without being stung is a sign of good luck, wealth, and hard work!

Of all the things I’ve featured on this blog, I think bees are probably my favourite (sorry, seahorses). Their rich folklore reflects their value to humanity.

And the value of their honey helps to explain why they often represent good luck (and prosperity) in folklore. Whether they’re wise, messengers for the gods, or bringers of good fortune, they’re a vital part of the community.

You can visit the Friends of the Earth website to find out what you can do to help bees in your area!

Or if you enjoyed this post, sign up below to get notifications of new articles. You’ll also get my recommendations for excellent folklore podcasts!