Paper as a material first appeared around 2000 years ago in China. The earliest paper sheets were likely made from mulberry bark, rags, and hemp.

The secret of papermaking travelled to north Africa and western Asia in the 8th century. In the 11th century, papermaking finally arrived in Europe via Spain and Sicily. Until this point, people in Europe used parchment or vellum, which is based on animal skins.

Paper made advancements like the printing press possible. Over time, it led to the development of news sheets, pamphlets, and all other manner of literature. One of its enormous advantages is the fact it’s light, portable, and recyclable.

Its inherent fragility, the fact you can destroy it through fire or getting it wet, makes it a surprising material of choice in some folk magic. Add this fragility to the fact you can inscribe it and reconfigure its shape! It makes it perfect for charms.

In this post, we’ll explore the folklore of paper via charms, books, and even news sheets… Hit play to hear the podcast episode of this post, or keep reading!

Paper is even baked into our wedding celebrations. It’s the material of choice for the first wedding anniversary (Webster 2008: 280).

So it stands to reason that paper would also appear in a range of charms. Some of them are a little more multi-purpose, but many of them focus on love magic. They’re often used in divination practices rather than full on spells.

Find out which is the suitor for you!

If you’re lucky enough to have more than one potential suitor, there’s a superstition to find which is the one for you. Write the name of each of the three would-be partners on three pieces of paper. Put them into a stocking with a piece of wedding cake. On the next two mornings, pick out one of the slips. The one left is the person you’ll marry (Daniels 2003 a [1903]: 58).

There’s another one that is more helpful if you’ve got more than three potential partners. (And if you do, what’s your secret?!) Write their names on separate pieces of paper. Roll each one in clay. Drop each of these clay balls into a glass of water. The first one to rise to the top will be your partner (Daniels 2003 a [1903]: 67).

The biodegradable nature of paper also makes it a useful addition to folk magic. One spell recommended that you write your partner’s name on a piece of paper. Pop it under an Easter-lily bulb when you plant it. How well the lily grows tells you how faithful your partner is (Daniels 2003b: 811).

People kept cake charms, called Agnus Dei, to guard against the Devil. Pieces of paper inscribed with the Gospel of St John were baked into the cake. You kept them as a protective amulet, rather than eating them (Webster 2008: 45). Agnus dei means ‘Lamb of God’, and in this case, referred to a type of devotional object known as a ‘sacramental’. In the early modern period, these items included objects that were blessed by the Church and taken home by worshippers (Cooper 2019: 221).

“Peter sat on a marble stone, weeping. Christ came past and said: ‘What aileth thee, Peter?’ ‘O my Lord, my God, my tooth doth ache!” “Arise, O Peter, go thy way. Thy tooth shall ache no more.”

A smuggler and murderer named Jackson died in Chichester gaol in 1749. They found a paper charm in a linen purse on his body. It said,

Pray for us now and in the hour of our death.”

Paper relics like these supposedly touched the heads of Cologne’s three kings. Keeping one was supposed to keep travellers safe from accidents, fevers, or sudden death (Daniels 2003b [1903]: 1339).

Got a friend you really want to see? Write both your names on a piece of paper. Fold the paper into nine and wear it next to your heart for nine days. If you burn it on the ninth day, your absent friend should appear soon (Daniels 2003 a [1903]: 80).

Richard Webster claims that there was an ulterior motive for illiterate people signing documents with a cross. Apparently, people intended this as a protective symbol to keep the document safe (Webster 2008: 69).

Paper money has slightly different connotations to coins. With the original metal coins, you possessed small amounts of those metals, which gave them value.

But paper notes are essentially promises to pay that amount of money. The paper represents a value, but doesn’t really hold that value itself. So it’s hardly surprising that paper money can also represent prosperity in how you handle it.

Fold your banknotes lengthwise to ensure you’ll always have money.

Don’t cram paper money into your wallet at random or you’ll lose prosperity.

I figured we couldn’t talk about the folklore of paper and not mention books. I know we can read them in digital formats now, but they’ve been made from paper longer than binary code.

If you dropped a book, you’d seen a ghost. That said, dropping a book while reading means someone is thinking well of you.

If a young man handed a book to a young woman, she’d be happy shortly. (Well of course she would, she’d have a book!)

Turning a book or newspaper upside down by accident brought bad luck. Unless you’d finished reading the book. In that instance, turning it upside down brought good luck.

A book falling from a bookcase means company is on its way.

If someone takes a book from you while you’re reading it, you’ll get a visitor within the hour.

Putting a book away upside down means you’ll forget its contents right at the point you need them.

If you’re looking for a particular page of a book and you open the book there, you’ll get great luck.

Don’t give books with red covers as gifts as it’ll break the friendship.

Then we have the fun practice of bibliomancy. This is divination by book. At one time, people would hold an intentional ceremony before breakfast on New Year’s Day. They’d open the Bible at random, and read a passage as a prediction for the coming year (Simpson 2003: 30).

But thankfully, you can actually use any book for bibliomancy. I’ve seen it described in two different ways. In one version, you browse your books until you’re drawn to one. In another version, you choose the book in advance.

Then ask your question and open the book at random. Your answer appears in the first passage your eyes alight on.

I tried this using Philip Carr-Gomm and Richard Heygate’s Book of English Magic, with a more general question, “What do I need to know today?”

I opened the book at a picture of an alchemical laboratory. It seems transmutation and transformation are important concepts today!

Of course, we don’t restrict folklore to the likes of folk magic and superstition. Folklore emerges through the ways people collect and disseminate beliefs and stories.

Broadsides became a popular way to do this. They were incredibly flimsy, and often single sheets of paper. Their key attraction was their low price.

They might contain the lyrics to popular folk ballads, news stories about crimes and scandals, illustrations, political diatribes, and anything the publishers felt people might pay for (Simpson 2003: 34).

One popular form of content was the ‘dying speech’, a monologue apparently dictated by a condemned prisoner and sold at their execution.

The Development of the News Sheet

By the mid-19th century, they might be around 8 x 10 inches, featuring two illustrations and two songs (Simpson 2003: 34). The 19th-century broadsides were far more accessible than their 17th-century counterparts. Their content was often much more vulgar or salacious. Some writers in the 17th century conducted debates through letters printed in the sheets.

Yet it’s the broadside ballad that is perhaps most useful to a folklorist. Those broadsides that still survive can help folklorists date folk songs, or trace variations. Clearly, the broadsides were not intended to last forever. This makes the ones that do survive very useful to those studying the songs of a given period or location (Simpson 2003: 34).

The broadsides captured in print what would have otherwise been an oral tradition. While people would have learned the melody of the song from those selling the broadsides, the sheets at least preserve the lyrics (Simpson 2003: 35).

What do we make of the folklore of paper?

I think the way the broadsides preserve folk songs is a key to the importance of paper. It helps us to preserve ideas in a relatively inexpensive way. You can write a thought and find it again later. Try trusting your memory with that!

It’s also thin and light enough to carry as an unobtrusive charm. Look at the toothache repelling charm – it’s not a difficult one to carry out yourself.

Yet paper is also fragile, and it will break down in water or earth. You can burn it, turning it to ashes. These qualities make it ideal for charms, especially if you want to release something. You can either write what you want to receive on paper and burn it, letting the smoke carry your wishes to the gods. Or you can write what you don’t want on paper, and burn it. Here, the burning symbolically destroys the thing you don’t want, cutting any energetic ties to it.

Which is your favourite snippet from the folklore of paper?

Daniels, Cora Linn and C. M. Stevans (2003a [1903]), Encyclopaedia of Superstitions, Folklore, and the Occult Sciences of the World, Vol. I, Honolulu, HI: University Press of the Pacific.

Daniels, Cora Linn and C. M. Stevans (2003 b [1903]), Encyclopaedia of Superstitions, Folklore, and the Occult Sciences of the World, Vol. II, Honolulu, HI: University Press of the Pacific. 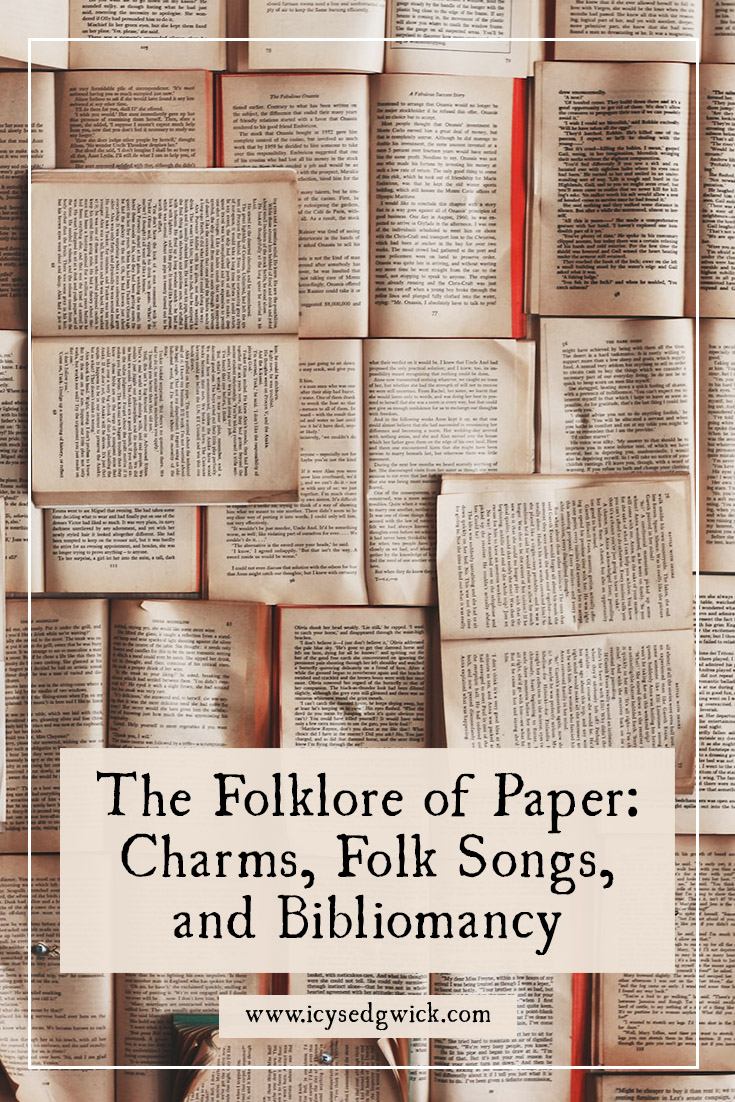