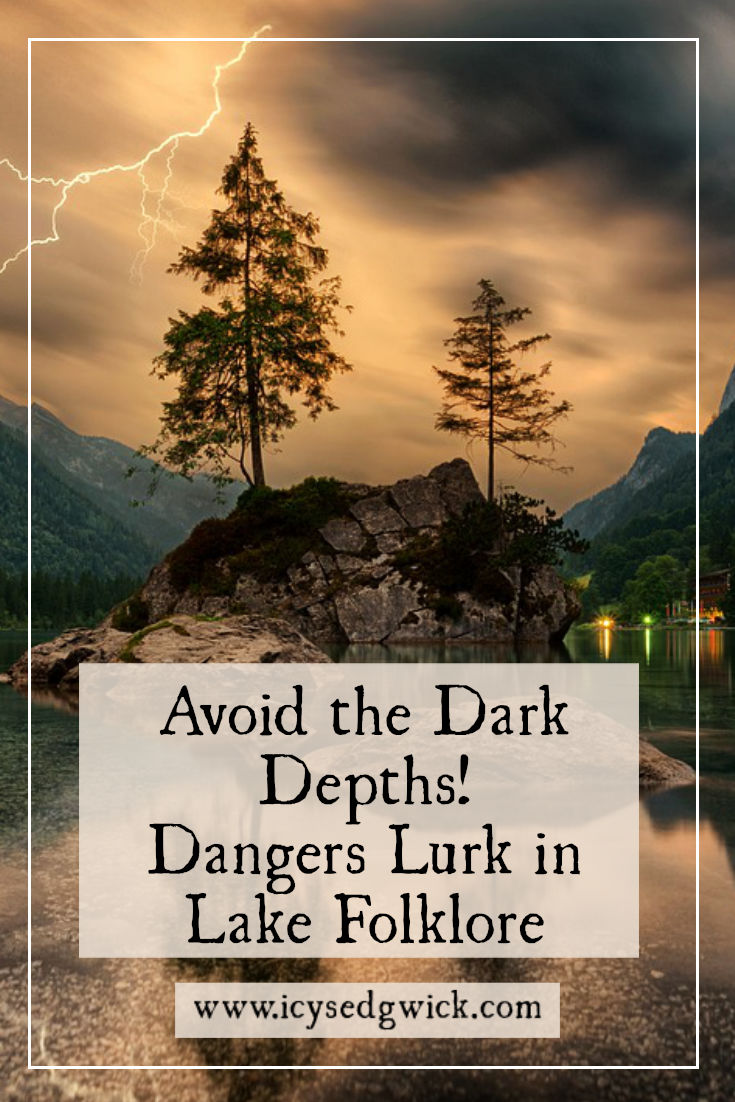 So let’s go and explore some tales of these mysterious watery spaces! Kit ‘play’ to listen to the podcast episode, or keep reading…

Most tales painted the rusalki as not being inherently malevolent. If someone avenged her death, she’d die in peace. If not, they’d lure young men into the water where they’d drown them. In this guise, the rusalka bears a remarkable resemblance to both Lorelei of the Rhine and some incarnations of Jenny Greenteeth.

We’ve talked before about the figure of Jenny Greenteeth (and the grindylows) as a water demon living in rivers. And we’ve compared her this week to the rusalka. She does appear in British lake folklore in a few isolated ponds, such as the pond near Trewey Common, or Doxey Pool.

But its more famous story concerns Jenny Greenteeth. While many Jenny stories call her a witch, the Doxey Pool variety describes her as a mermaid. A 1949 report describes a strange creature climbing out of the water, believed to be Jenny (Mrogerson 2021).

One origin story claims a sailor brought the mermaid to the pool after he fell in love with her on a voyage. He died but, being immortal, she didn’t. She grew lonely and bitter because she couldn’t return to the sea. In this version of lake folklore, she haunts the lake to lure the unwary to their deaths (Johnson, no date).

Another story describes Jenny Greenteeth as a local girl who spurned the attention of a local man. He accused her of witchcraft and she was drowned in Blake Mere Pool. She cursed him with her dying breath, and three days later his dead body turned up beside the pool (Johnson, no date). If you believe this lake folklore, no birds fly over Blake Mere (Reader’s Digest 1973: 32).

The previous story links Jenny Greenteeth with the mermaid, who we normally associate with the sea. According to Reader’s Digest, mermaids could also be “guardian spirits of inland waters” (1973: 32). Here, they kept an eye on the actions of humans.

In one tale, people decided to dredge Aqualate Mere in Staffordshire in the 19th century. A mermaid appeared and threatened to destroy two towns if they continued their work (Reader’s Digest 1973: 32).

Trouble is, the mere never reaches more than a metre deep. It’s hard to know where a mermaid would live in a pool that shallow, unless she travels along the streams that feed it. This legend is also attached to Blake Mere, when locals wanted to see if it was bottomless as claimed (Johnson, no date). I can’t help thinking that version is more plausible.

There’s also a legend of a mermaid in Mermaid’s Pool near Kinder Scout in the Peak District. She’s supposed to appear at midnight at Easter. If she likes the look of you, she’ll make you immortal. If not, she’ll drag you to your death in the pool! The rest of the year, the waters allegedly provide healing powers for anyone who bathes in them (Johnson, no date).

Others say you need to look into the water at sunrise on Easter Sunday to see the mermaid. And yet others more say that she’s not a mermaid, but rather a nymph who lives on Kinder Scout. She bathes in the pool every day, and you have to see her on Easter Eve for immortality (Hope 1893: 45).

According to Tim Sandles, the waters announce the name of the next parishioner who will die. If you look into the lake at midnight on Midsummer’s Eve, you’ll see their face (2016).

If you enjoyed this post, add your email below and get my guide to home protection—the folklore way!

Johnson, Ben (no date), ‘The Mermaids of the Peak District’, Historic UK, https://www.historic-uk.com/CultureUK/The-Mermaids-of-the-Peak-District/.